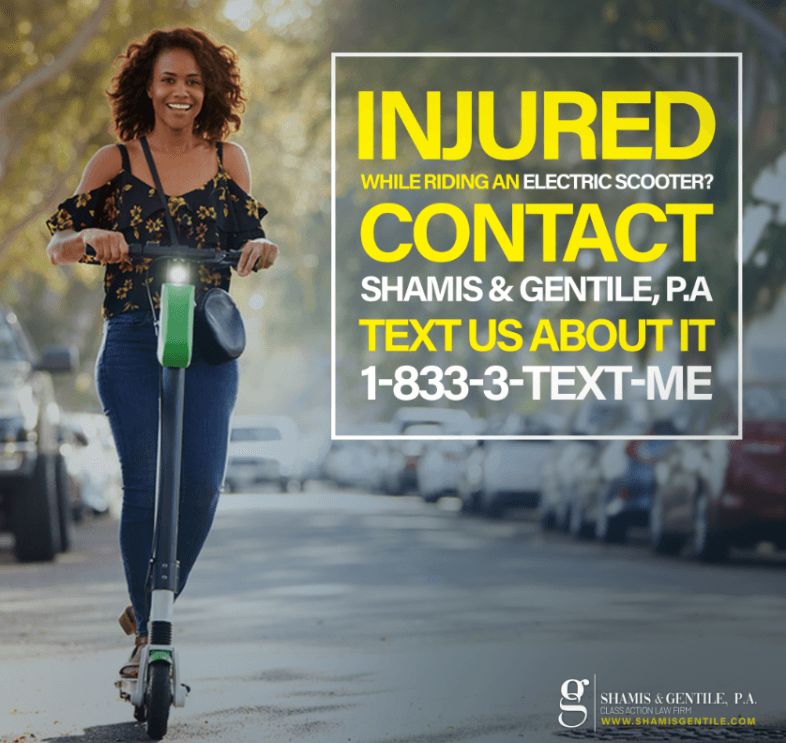 Electric Scooters have unleashed on streets across the country in 2018, are wildly popular, helping thousands of people make short trips without getting into a car. Companies Lime, Bird, Bolt and Lyft rolled out hundreds of scooters in Fort Lauderdale and Miami as part of a yearlong pilot program. According to research, cities are seeing a staggering increase in Electric Scooter Accident injuries at an astronomical rate.

A new law signed by Gov. Ron DeSantis on June 18th, 2019 legalized the motorized scooters on Florida streets, where they’ll be treated like bicycles and allowed to zip along in bike lanes.

Fort Lauderdale, one of the first Florida cities to welcome them to sidewalks last fall, will now discuss whether to remove them from some busy sidewalks or ask scooter companies to lower speeds from 15 miles an hour to something slower, require helmets or impose age restrictions. Cities also can regulate where and how scooters are parked on public streets or sidewalks.

Just north of Hollywood in Fort Lauderdale, WFOR-TV reported in November that approximately 1,200 scooters in Fort Lauderdale had already amassed over 40,000 rides and another 800 scooters were being delivered. One of the reasons that commissioners in Hollywood expressed concern about scooters was the increased likelihood of accidents. WPLG-TV reported a 27-year-old man was killed while using a dockless scooter when he was struck by a car.

Electric Scooter Accident Research Shows Injuries are on the Rise

A Push for Electric Scooter Safety

Lime, the micromobility company that’s flooded the streets of more than 100 cities around the world with fleets of green-and-white electric scooters, recently launched a Public Policy and Safety Advisory Board.

The group, which convened for the first time at a safety summit in San Francisco, is tasked with determining what research and policy initiatives to pursue, what regulations to advocate for, and how to generally smooth the company’s sometimes-bumpy relationships with cities, riders, and riders-to-be.

Lime’s announcement reflects a growing acknowledgement within the e-scooter rental industry that safety concerns present a major barrier to mass adoption. Shared e-scooter and bicycle trips in the U.S. more than doubled last year to reach 84 million, but companies face fresh regulatory pushback amid reports of vehicle malfunctions, incidents of rider misbehavior, and the industry’s often-chaotic roll-out. Several high-profile safety studies have emerged: Consumer Reports recorded 1,500 scooter-related injuries in the U.S. in 2018. Researchers in Santa Monica found that scooter injuries landed people in the hospital about 50 more times than bike accidents in the same year-long period. And a study from the Centers for Disease Control and Prevention revealed that for every 100,000 trips taken in an Austin scooter pilot, 20 individuals were injured.

Did you sustain severe injuries or was your loved one killed in a electric scooter accident in the greater Fort Lauderdale or Miami area? Make sure that you contact Shamis & Gentile, P.A., as soon as possible.

An experienced electric scooter accident lawyer would be happy to review and discuss your case, free of charge.

previous
Sick of Spam Text? Stop Spam Text Messages and Recover up to $1500 Per Violation
next
Is Your Bank Charging You Unfair Overdraft Fees or Non-sufficient Funds Fees?